Main Boom: Edges were cut to shape with a trim router. I think the flush cut bit wants to be more than a flush trim bit, the bit needs replacing or my technique needs improving. Here's how the top and bottom of the boom looked after the sides were trimmed to shape. 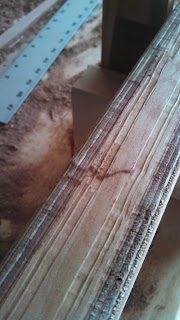 The those cutting marks on the top and bottom were sanded out and the edges were rounded over today. The butt joins still need fairing but the yard is shaping up nicely. 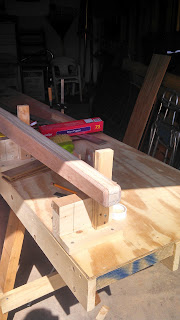 This is a "monster" boom weighing 4.55 kg (10 pounds). Compared to the Karen Ann's boom (similar dimensions and construction but with lighter materials) at 2.18 kg (4.8 pounds), the new boom is quite heavy. It is also quite stiff. A 10kg weight suspended at the mid-point of the boom caused a 6mm deflection in the vertical dimension.

Boomkin Mount: Finally assembled. The outer most blocks are being used for clamping pressure and are not part of the mount. 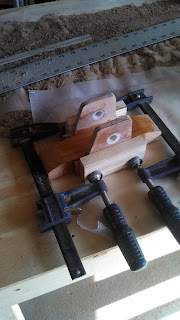 Main Mast Step: Assembly of the main mast step began today with the gluing of the middle staves. These two photos show the middle section of the step glued up in two parts. When spaced properly and sandwiched between the two outer sections, these two components will create the square hole for the mast to sit in. Not much to look at now but in a day or two these pieces will be part of the larger whole. 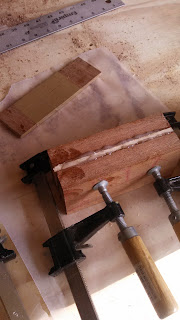 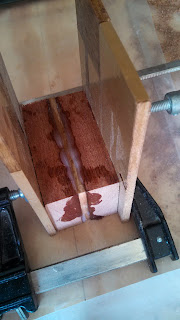