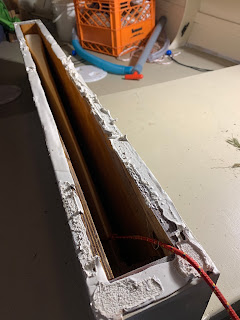 Any ideas on cleaning up the (apparently) 'damaged' tape?

Any suggestions for improving the seal between then box and the trunk?

This year's sailing vacation at McKay Bay in Les Cheneaux Islands on Michigan's Upper Peninsula was a success.

Monday's (8/22) four-hour drive north to the UP was uneventful... Clear skies, plenty of sunshine, and not much traffic. I was a bit anxious about that trip because Gardens sat on her trailer in the barn for two years without moving. I greased the bearings and checked the tires before leaving but I was nervous about the drive. Thirty minutes into the trip I stopped to check the bearings: cool to the touch. My anxiety disappeared and the rest of the drive was fun. 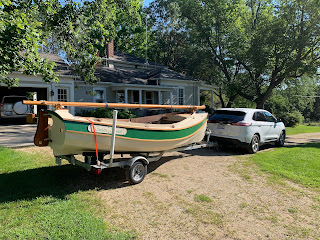 Monday afternoon we pulled into the parking lot at the boat ramp on McKay Bay. We decided I'd motor Gardens the quarter-mile across the Bay to the cottage, which meant we didn't need to step the masts or rig the boat at the ramp. Backing the trailer straight down the ramp the first try was a pleasant surprise (I'm not very good at backing - but apparently I'm getting better)! Gardens at the dock Monday evening: 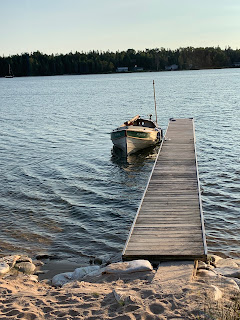 Tuesday morning we stepped the masts, connected all the bits of rigging, installed the rudder, and had a minor struggle fitting the tiller to the rudder head. I had reworked the tiller over the winter and, despite test fitting everything during that process, the tiller would not fit correctly. The issue turned out to be the rudder head not sitting properly on the pintles. The tiller was hitting the top of the opening in the transom. That minor struggle was frustrating but once resolved we went sailing!

Tuesday's sail was great! Light winds at the outset gave us the time to sort things out and become reacquainted with Gardens. By the time we were passing Port Dolomite, the winds had picked up a bit and the sailing, while not 'sporty,' was very good. The new mainsail from Really Simple Sails looked great and performed well! Just west of Strongs Island we met up with our friends Andy and Rose motoring their Express 35, Fraser, to visit us in McKay Bay. We enjoyed some close (but not 'too' close) sailing while we shared hellos and news. Andy and Rose spent the summer on Lake Superior so there was a lot of catching up to do. The wind picked up a bit more and by the time we returned to the dock we had an exciting downwind landing. The not-lowered-all-the-way centerboard served as a brake in the soft sand bottom alongside the dock. The rub-rail took a small hit (an off-season repair added to the list) but no other damage to Gardens or the crew. Andy anchored off the cottage in nine feet of water.

Wednesday morning I tweaked the rigging a bit: the lazy-jacks needed sorting out. By 11:00 we were underway on Fraser for a cruise to Government Bay, a bit over five miles by water from the cottage, for a picnic lunch and a hike. It was a beautiful day. We anchored just off a small sand beach and enjoyed our lunch on board Fraser. It was good to hear about Lake Superior, going through the locks at the Soo, and their other adventures. After lunch we dinghied to shore and set off on a 1-hour hike on a rustic trail. There are no-reservation first-come campsites on Government Island and I scouted a few for possible future boat/camping outings. The pictured beach and cove (not the beach we went ashore at) are near the south end of Government Island 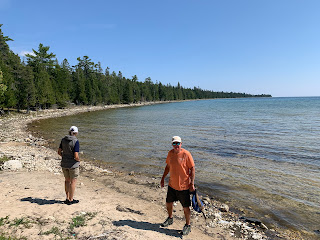 In the wee hours of Thursday morning the forecast rain began... and continued until 3:30PM. Heavy rains for over 12 hours dumped 12-15 gallons of water into Gardens' bilge. We had a similar bilge-water experience in 2019, and I thought I "fixed" that problem. Not so. I suspect the deck plates may leak - but it is difficult to understand how that much water could leak through the deck plates (I have since built a deck plate mock-up, fitted on a 5-gallon bucket to test the plate. After 10 minutes with the garden hose, the bucket had a little over a pint of water in it. Extrapolated over 12+ hours, the test results suggest that 12-15 gallons leaking through the two deck plates was not unrealistic.) Upgrading the deck-plates is on the off-season work list along with other chasing-leaks tasks. Fortunately, the centerboard pin does not leak!

Under clear skies early Friday morning, Andy and Rose weighed anchor and headed to the marina in Saint Ignace. After running errands that morning, Jan and I went sailing. The winds were brisk and the sail down McKay Bay toward Crow Island was great fun. As we approached Crow Island we were out of the lee of Strongs Island. The winds were stronger and we sailed into a swell and white caps.  I made the executive decision to return up past Strongs Island and into McKay Bay. As we neared the dock, the wind diminished enough for me to drop the mail and motor to the dock in a civilized manner. Covering barely over six miles it was not an epic sail but it was a very satisfying sail. I posted the Relive animation of that sail to the John Welsford group on Facebook but cannot figure out how to imbed it or link to it in this format.

The drive home on Saturday was pleasant and uneventful - but, unlike most return trips, it seemed to take forever. We've already reserved the cottage for next August! 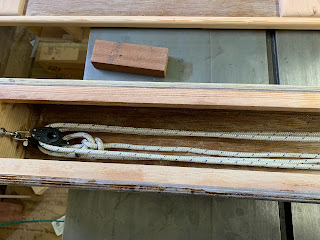 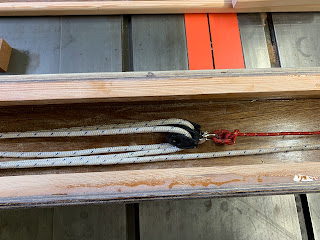 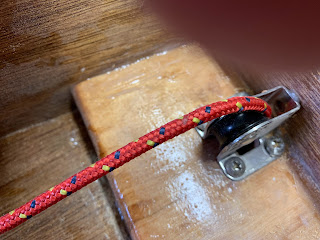 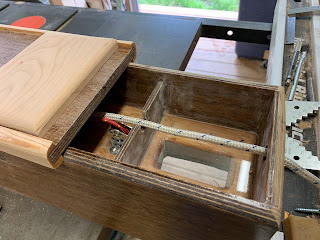 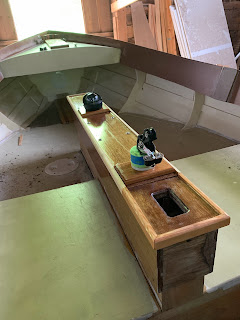 I've thought about a boat tent for quite a while... one reason I haven't done any boat camping is because I didn't have a tent (that probably qualifies as a self-fulfilling excuse).

So, after recent reading, YouTubing, and discussions there seem to be three basic design choices:

Gardens has a balance-lug yawl sail plan. The boom extends forward of the mast which, along with being rigged with lazy-jacks, does not lend itself to a traditional boom tent set-up.

The prep work has begun. Clearing some space behind Gardens in the barn so she can be moved back a few feet to allow enough clearance to step the masts inside the barn. I purchased some 3-mil painters' drop cloth to use in mocking up the tent panels. A few bits of hardware (hooks and a boom bail) have been ordered from DuckWorks. The next few days will be marginally warmer so I plan to begin work soon.

In the meantime, here is a bit of motivation for getting boat work done during the winter. 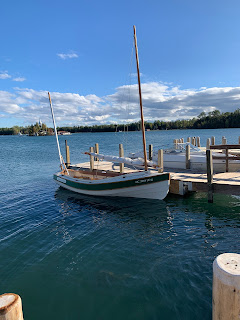 Seems I've done very little with, for, or on Gardens in a very long time. Time for a re-set and a return to boat work. However, because it is mid-winter in Michigan, I am once again at the "What about...?" stage of planning and projects.

So, what is in the works?

New Rudder Blade: Stalled (bit and collet are STUCK in the router (may need to replace router) 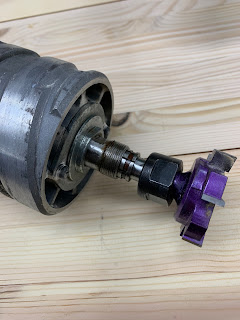 One recently completed task: I've joined TSCA and DCA. Not sure of any local or regional activities for either group, but I am looking forward to each Association's publication.

Work began on the router jig to shape the rudder.

A mock-up of the jig consists of wo pieces of 1/2" ply.  I made the mistake of cutting the foil shape out on each piece separately. The two pieces don't match perfectly as the sanding belt broke (you can see where) before I finished fairing the two pieces. Used double-backed tape to hold them together while I cut the 30mm notch (for the rudder blank). 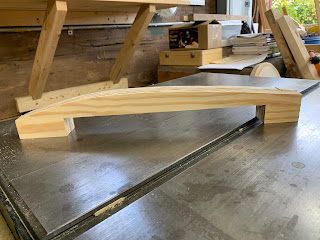 After I clean up the wrinkle in the rail, the first test effort using the trim router and the jig went okay, but not great. Neither the blank nor the jig were clamped down for the test cut. The trim router was more difficult to control: it wandered a good bit, seemingly with a mind of its own. Shallower (and therefore more) cuts, a larger diameter bit, and maybe the larger router may lead to better results. 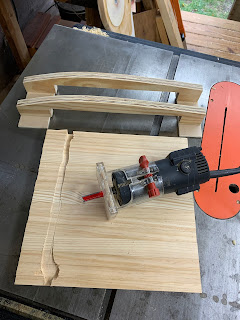 My next trial cut went much better. I used the larger router (it has handles and variable speed), a larger bit designed to hollow & clean out small bowls and boxes; and shallower cuts. Running the router at its lowest speed, the larger bit, clamping the blank down, and gradually increasing the depth of cut produced a much better result. One thing I learned, though, is that if the rails are not perfectly faired & matched the router will not be perpendicular to the blank - resulting in slight ridges between passes. 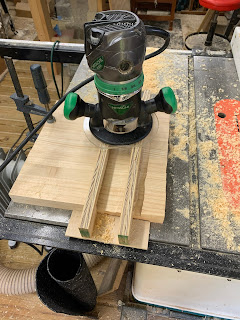 New rails will be pattern-cut from hardwood and faired to match. Hopefully, after a few practice cuts, I'll soon be ready to shape a new foil from the full size blank.
Posted by Bob at 9:00 PM No comments:

First Steps to a New Rudder

Last month I described my efforts to remediate Gardens' rudder and eliminate the annoying wobble resulting from the slop in the fit of the blade in the rudder stock. The possibility of fabricating a new rudder was mentioned...

That possibility has progressed to actual 'project' status. Copies of the rudder foil drawing from the plans will be used as templates to create a router jig to "carve" the foil from the blank. 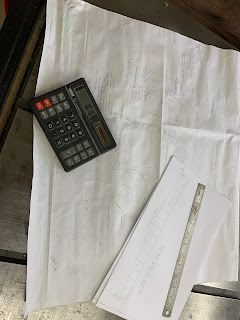 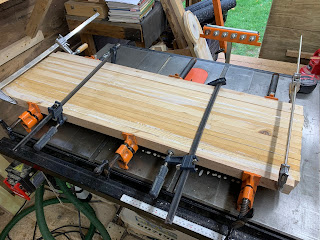 Rather satisfying to be using materials from our property.

Next step is to  mill the glued-up blank down to the specified dimensions of 30mm x 300mm. I will leave the blank long to provide support to both sides during the router-carving process. Photos should illustrate that process when I get there.