Friday was a treat: my BIL and I attended SCAMP Camp #8 for the day. It was good to see old friends and meet new ones. Seeing five SCAMPS in various stages of completion under one roof was educational and motivational. I never knew a utility knife blade could be used as a mini-scraper. Discussions of winter-time boat building in Michigan and Ontario resulted in ideas for extending the fall season and getting back to the shop earlier next spring. 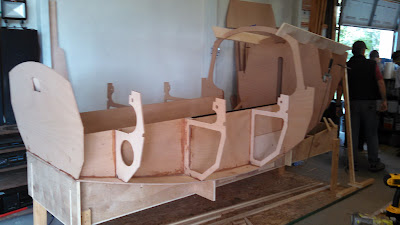 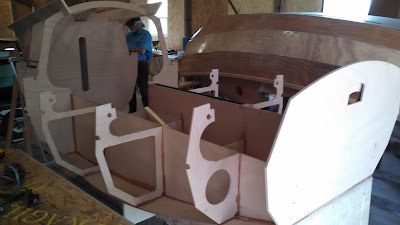 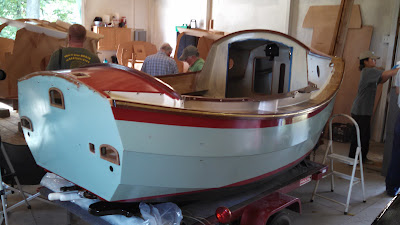 While at SCAMP Camp I came to a decision: I will give Gardens my best effort to have her launched, outfitted and shaken down in order to participate in next year's Texas 200. This is an ambitious goal but one worth focusing on: John Welsford will be sailing in the event as will a number of other friends and acquaintances. The Saturday Night Special project (6 of John's new Saturday Night Specials to be built and sailed in the Texas 200 and kept as loaner boats) is a feature of the build-up to the 2016 Texas 200. There is also a good chance four or five Pathfinders will be there! I look forward to being a part of it all.

While the leaves on the trees are changing colors (yes, already!), Gardens is changing colors, too. The darkish brown of epoxied meranti plywood is giving way to the bright white of primer. Gardens will soon have a splotchy look to her as I sand,fill and fair the few blemishes revealed by the primer. But the prospect of painting color is exciting and not far away.

The mast… The mast has been shaped to nearly round - it won't ever be perfectly round - using my block plane and 40-grit paper on the ROS. Lots of shavings and sawdust! The next step is sanding the entire length with 60-grit paper, but I suspect it won't take nearly as long to do as the initial sanding/shaping.

Three other Pathfinders that I know of are in the works in Florida, Texas and Georgia. It is exciting to see each emerge from wood to become beautiful Pathfinders. Seeing the progress on these builds motivates me as I work on Gardens.
Posted by Bob at 8:04 PM No comments:

This has been a busy week: Jan's hip surgery (it went well and she is home recovering); painting contractor doing their thing (painting the house); other routine household tasks that aren't difficult for me but take time and even a bit of boat work.

The mast is coming along nicely albeit slowly. It takes time and effort to take the octagonal blank to round.

The fairing of the hull is proceeding better than I expected. Painting will begin soon - possibly Saturday but no later than Sunday!

Figuring out a mast-gate arrangement involves a bit of mental gymnastics with a few sketches thrown in for good measure. I think I know how I want to build the mast gate but it will probably a bit of trial and error when it come time to actually installing it in Gardens. Fortunately, I have time to think about that project.

So, Jan is doing very well; the house looks great with its new paint scheme; the septic tank is empty; the propane tank is full and progress is being made on Gardens. Life is good.
Posted by Bob at 10:13 PM No comments:

Inspiration comes in different forms from different directions. Questions from another builder, research on boat related issues, a couple of threads on WBF and legitimate, visible progress on the mast have inspired me and shifted my mental outlook for Gardens.

In the last few days I have been inspired and Gardens has benefited. I think I've made more real progress on Gardens in the last few days than I did in the last few months. Maybe not… but… I am excited about what I can achieve in the next six to eight weeks (before seriously cold weather sets in around here).
Posted by Bob at 7:53 PM 1 comment:

The mast is a work in progress: 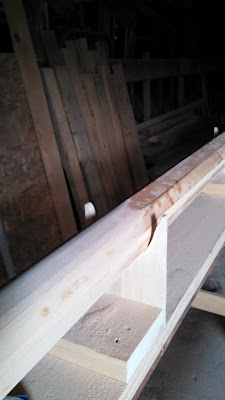 Since the photo was taken the mast is now 16-sided and beginning to emerge in a roundish shape. Tools of choice are my block plane and ROS. The block plane does a good job of flattening the corners. The ROS with 40 grit paper does a good job of round(ish)ing the mast. Sessions with 60, 80 and 120 grit will follow.

As a diversion today, I weighed the mast and yard. The mast is 18'8" long and weighed in at 24.9 lbs. The yard is 12'9" long and weighs 9.8 lbs. This is considerably heavier than the yard on my GIS, but the PF yard is also larger in cross-section and is stiffer than the GIS yard.

Recently, another PF builder made me aware of a possible issue with the plan sheet describing the balance lug yawl sail plan and the placement of the mast in the boat. Some details don't make sense and we expecting clarification from John W.
Posted by Bob at 8:02 PM No comments: 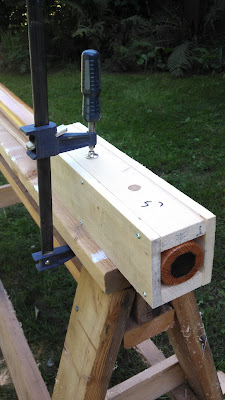 Yesterday I drilled out a 5/8" hole and filled it with thickened epoxy. Today I topped off the filling. Tomorrow I'll sand the epoxy, fit the drill guide over the yard and drill out the 3/8" hole for the eye-bolt to which the throat of the sail will be attached. So far the process has worked well.

L.L. Johnson Lumber delivered the two 17' pieces of 1 x 6 CVG DF I purchased last week. These (together with DF left over from the mast) will be used for the mizzen mast and main boom. Those projects will begin soon.

The package from Duckworks arrived, too. Bits and bobs of hardware for the spars along with some building supplies. One item, the Jack Tar spar leathering kit, inspired a bit more shopping. I intended to use the kit on the yard, but the leather in the kit is too short - or seems too short to me. I can use this kit on the mizzen mast but will need longer pieces of leather for the main boom and yard - and I found what appears to be a decent source of leather in Grand Rapids. The next trip to town will include a stop at the leather store.
Posted by Bob at 3:28 PM No comments:

A quick trip to Louisville, Kentucky this weekend meant no physical progress on Gardens. But all was not lost.

Boatbuilding progress of a sort was made, I think. Driving along the highway, listening to a book on tape, I managed to sort out - at least in theory - how to drill straight holes in round spars. Now, I know I did not come up with anything that hasn't been thought of before, but I like the idea that I figured out a workable solution to a task that has caused me troubles in the past.

Will my solution work? In theory, yes but, as we all know: In theory, there is no difference between theory and practice. In practice, there is… We'll see what happens in practice.
Posted by Bob at 8:03 PM No comments:

Plugs were all cut and fit by lunchtime Monday, so Jan and I finished assembling the main mast that afternoon.

Finished plugs - and I checked the plans multiple times and measured and marked the positions for the plugs - before assembling the mast: 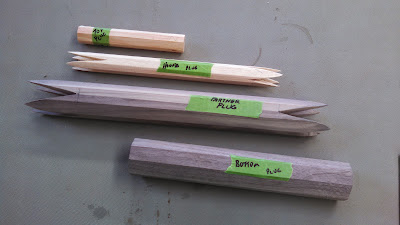 The two halves went together without difficulty and all seams looked good. We used all the hose clamps we had… I'm sure we had enough.

The clamps came off this morning and the mast looks good. There is, however, a good bit of sanding ahead to round it out. Fortunately, the weather has broken and both the temperature and humidity have eased. Sanding will not be quite so awful over the next couple of days.
Posted by Bob at 8:45 PM No comments:

There are four plugs for the main mast: Bottom, Partners, Hounds and Top.

Three of them, Bottom, Hounds and Top, are cut to size and fit quite nicely. 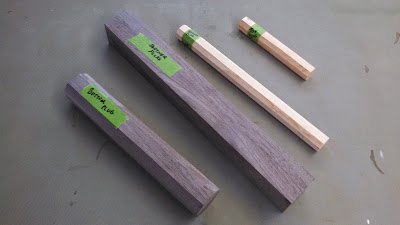 The plug at the partners needs to be sized, fitted and notched (to avoid creating stress points) and the Hounds plug needs notching, too, before I can glue the two halves of the mast together.

One thing about taking advantage of space in the barn - there is a LOT of space. My shop and where the mast is being assembled are as far apart in the barn as they could possibly be and the path between them is a bit circuitous. I ran out of steam yesterday while fitting those three plugs. Today is just too hot and humid for comfortable work in the barn. Tomorrow...
Posted by Bob at 6:20 PM No comments:

Once it was all clamped and straight we set about filling small gaps with epoxy and pretty much admiring our work!

Lessons learned from this mast assembly:
Posted by Bob at 5:51 PM No comments:

Had to rearrange plans to accommodate my help - hey, stuff happens.

Today was well spent on preparing the work-space for the glue-up. The spar bench and a set of roller stands (to support the staves while we slather on epoxy) were set up - fortunately the space is about 43' long. 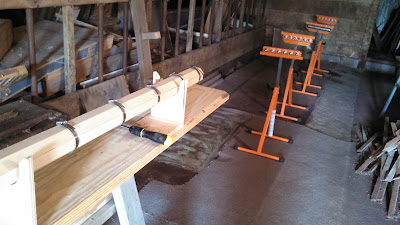 Jan and I did a dry fit and got everything together. 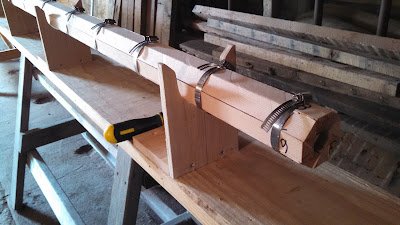 When I realized that my largest hose clamps did not fit the bottom end of the mast, I figured I'd have to chase down larger clamps in the morning. 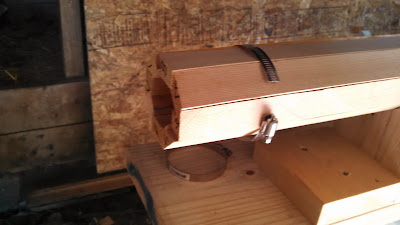 However, when I mentioned this to one of tomorrow's helpers I learned something new. He told me to link two smaller hose clamps together to get the size I needed. Works like a charm.

With three of us working together - one mixing epoxy, two spreading epoxy and three clamping the assembly - the glue-up should go well tomorrow. (The beer - for after the glue-up - is on ice in the cooler. It should be very cold and welcome tomorrow!)
Posted by Bob at 9:30 PM No comments: