Built Myself Into a Box

Or, more accurately, I built myself outside the box…

Way back when, early in the build, I decided I didn't want the centerboard raising/lowering mechanism shown in the plans. I wanted the centerboard to pivot as drawn but I wanted a simple pennant attached to the trailing edge of the CB passing through the top of the CB case and secured to a cleat. So, I built the CB case accordingly - the top completely closed in.

At some point I saw the problem with what I had done: how to install the CB and be able to line everything up. Might have been able to do it when the hull was still upside down… but now the boat is upright. I thought I could install it from below once the boat is on the trailer, but there isn't enough clear space in the trailer frame.

One possibility is to cut away the top of the CB case, install the CB and rebuild the top of the case. This option would let me lower the CB into the case with a sling.

Another solution is to build boat stands to support the hull high enough off the floor to fit the CB in from the bottom (using a jack of some sort to raise the CB into position).

Using boat stands and cutting away the top of the CB case would also work - keep the hull low but well supported and facilitate fitting the CB into the case.

Truth be known, I should have built stands last November when we turned the boat over.

Second truth… "Off plan" modifications need to be thoroughly thought though and planned before implementing.
Posted by Bob at 7:07 PM 4 comments:

Slow progress of late, due primarily to a lingering 3-week cold. The meds are working and I am feeling much better, thanks.

Yesterday's project was to build a gantry to raise Gardens onto (and probably off of) her trailer. 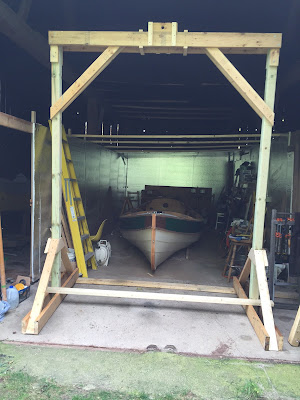 8' wide, 10'tall, 1-ton chain hoist (not pictured) (and that temporary bottom cross-bar will be removed).

The Boat Cave clutter will be cleaned up before the gantry is positioned and Gardens comes off the floor.
Posted by Bob at 7:23 AM 3 comments: