We needed a break and a short get-away to Lex Cheneaux Islands in Michigan's UP was just the thing. We reserved a cabin, got the boat ready, prepped some meals and packed our bags. Wednesday’s four-plus-hour drive from home to Cedarville in the UP went well. We’ve got a few trees around home that are tinged with red and the farther north we went, the more and better the colors got: reds, yellows, oranges. The last weekend of summer and autumn has fully arrived in northern Michigan.

We arrived at the Les Cheneaux Landing resort around 4:00pm. We checked in, parked the boat near the ramp, and unloaded the car. We planned to launch the boat that afternoon, but given the conditions - wind was blowing 9-10, gusting to 12 from the N; and I was tired - we decided to wait for morning to launch.

The cabin we rented is a very small, knotty-pine interior, two bedroom affair with a small kitchen and sitting area - which worked for us: The second bedroom became (or maybe has always been) a closet… Two couples sharing this cabin (advertised as “sleeps four”) would be very cramped…

We enjoyed a relaxed evening: a spaghetti dinner, a walk down to the dock, cooling temperatures, a couple of beers… peace and quiet… 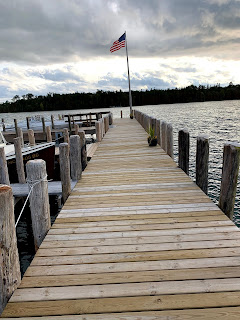 The next morning, after a good breakfast of coffee, eggs, toast and fruit, it was time to launch Gardens. Things (backing down ramp) went well (no audience of advisers). The wind was, thankfully, very light as I backed the boat out of ramp; did a couple of unintended loop-de-loops (narrowly missing a pontoon boat) before getting into the slip.

Rigging the boat on the water went smoothly with no major complications. My biggest surprise was that the halyard and lazy-jacks did NOT wrap each other up into a tangle. And the lazy-jacks worked well to ease the rigging process. One mistake: I didn’t run the halyard around the mast (to hold the yard close to the mast) but I never noticed it until we lowered the sail at the end of the outing.

Light NNW winds (3-4mph) helped us back out of the slip and we were off… Winds promptly went to 7-8mph (gusting 10) so we enjoyed some nice sailing. We took what the wind gave us and headed SE down Snow’s Channel. Pretty much a downwind ride to Conner’s Point and Muscallunge Bay. The wind backed to W and piped up to 10mph (gusting 12). The geography of the islands bends the wind quite a bit depending where you are in the bay, and I found it difficult to maintain a steady course. It was fun but taxing.

A steady W wind would have been nice heading back up Snow’s Channel, but again Marquette Island and shifting winds worked against a nice easy beat. In the lee of Marquette Island, the winds became light and variable: from lulls of 0 to 5-6 (gusting 8); and shifting from SW through to N - and sometimes back.  Oh, we sailed back but tacking became tiresome in the lulls, shifts and gusts. Gardens seemed to work against the return as well as we weren’t able to complete every tack. However, the winds co-operated, the trolling motor worked well as we neared the dock,  and I didn’t hit anything getting into the slip.

It wasn’t a long sail, but it was wonderful.

The GPS recorded a max speed of 6.1mph during a deep reach across Muscallunge Bay. Unfortunately, I forget to turn off the GPS and the Navionics app until long after we were done sailing (yes, I recorded securing the boat and walking from the dock to the cabin…) so the ‘moving’ average speed was lower than it really was… I’ll learn sometime…

Friday morning was similar to Thursday but with lighter N-NW winds. We went SE down the channel to Muscallinge Bay. And so, our sail was similar to the previous day. All went well until we headed back up Snow’s Channel. Light and shifty winds seemed to work against successful tacking, but not on every tack.

We (meaning I) experienced some difficulties completing tacks. Gardens goes into irons pretty handily. I tried several tactics to overcome these difficulties (un-sheeting the mizzen, more boat speed before starting the tack; minimal rudder; and manually backing the main), but the inconsistency of the conditions (wind speed and direction) and the intermittent successes/failures of tacking created uncertainty about what was happening. At one point during a failed tack into a lull, I released the rudder and eased the sheets and Gardens did a slow figure-8 - a  Yes, a slow, gentle falling off to starboard, through a gybe, and through another gybe before I took the tiller and managed to react to a wind-shift puff. I have no explanation for that.

Ignore the stats: For some reason, Navionics did not accurately record time, speeds and distances. The trip time is close but certainly not speed or distance.  Perhaps poor cell coverage accounts for that?

We returned to the slip to secure Gardens for the night, and the lazy-jacks proved their worth once again. I’m not sure where I developed a reluctance to lazy-jacks but I am glad I’ve gotten over it! 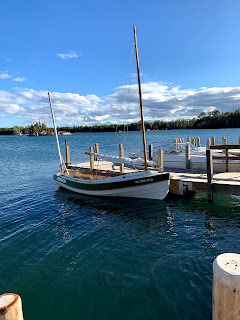 Saturday was cloudy, cold (mid-40s), and windy with rain in the forecast. We decided not to sail and, instead, drove to Salt St Marie for some touristy sight-seeing. After watching an ore boat lock through the Soo from Lake Superior to the St Mary’s River, we drove to Whitefish Point. We walked the beach in a building S wind, marveled at the water-smoothed rocks and got back to the car as the rain began. By the time we got back to the cabin the rain had subsided and it was time to pull Gardens and pack her up for the road trip home.  Sunday’s drive home under sunny skies was uneventful and I began a mental “Winter Projects” list…

The Navionics app has a play-back feature. Watching the tracks of both sails, it seems that we completed significantly more tacks than we missed - despite the perception/impression/memory that hits and misses were about equal. Thursday’s ratio was 8:4 (hits to misses); Friday’s ratio was 12:4 (hits to misses). So… things were not as “bad” as I let myself believe, but clearly there is room for improvement. I was more mindful of un-sheeting the mizzen on Friday than on Thursday. Also, on Friday I observed slight weather helm more than I did on Thursday. However, on both days there were periods of lee helm, and on at least two of those missed tacks, the lee helm prevented enough increased rudder at the beginning of the tack.

This outing was not intended to be an overnight boat camping experience - we (Gardens and us) are just not prepared for that yet. We enjoyed two really great days of sailing, learned some things; enjoyed some needed peace and quiet (very limited wi-fi contributed to that) and came away pleased with the five day get-away. Baby steps (with a cabin and dock) will lead to more adventures. Some items on the Winter Projects list will be improving Gardens' accommodations for boat camping.