Warts, blemishes and other flaws are being sanded, filled and otherwise repaired. Some of them will take more time and several layers of fairing but the end result should work out well.

Meanwhile, waiting for epoxy to set up, I have been preparing to build some spars. I do not have enough room in my shop to feed 12-18 feet of lumber into my table saw, and the table saw is not portable enough to move around.

A barn-found Delta 10" contractor's table saw is both serviceable and portable enough to set up in the garage where there is a level floor and enough room to mill material for Gardens' spars. After cleaning out who knows how many years of dust and debris, installing a thin-kerf ripping blade with stiffener, lengthening the fence and adjusting nearly everything, I have the saw cutting square. Test cuts produced satisfactory staves for sample sections of round and elongated spars. In-feed and out-feed supports are ready so things are about set to go. Except…

Except my helpers (I don't much want to handle 20' lengths of lumber by myself) are out of pocket until next week. And, in fact, I'll be out of town myself this weekend. So, no more progress on the spars until next week.

But the remedial work continues through Friday and will resume on Tuesday.
Posted by Bob at 8:42 PM No comments:

Warts, Blemishes and Other Flaws...

I've made progress with Gardens and will push on through the summer and as late into the fall as possible (hard to believe I'm contemplating the coming winter in July...). But reviewing Gardens' hull today with a realistically critical eye I saw the warts, blemishes and other flaws I've created.

Now, I have always maintained that what I see in my mind's eye does not come out of my hands, but even I was surprised with some of what I saw today:

Daylight gap between a plank and the transom (and I've assured Jan the boat won't leak - and it won't - but I wouldn't want to test that statement today). 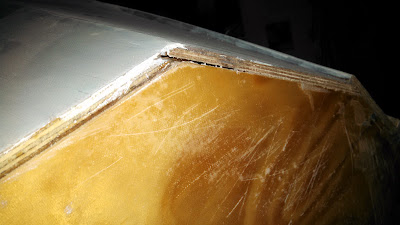 Serious blemish where two planks meet. Not sure what happened here and not sure what I'll do about it but I will figure it out. 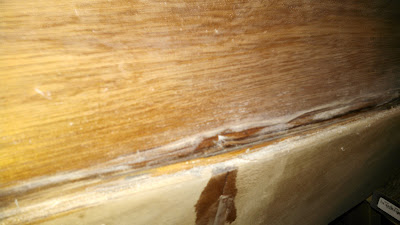 Sample of pock marks and irregularities along the laminated stem and centerboard slot surround. These will be tedious to fill and fair. I've also come to the conclusion that more substantial fillets are called for along the stem, centerboard surround and skeg. 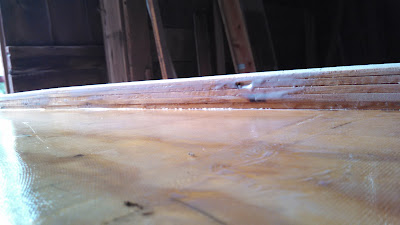 So I'll be busy with remedial work and new work. I'm not discouraged but there are times I wish I were a better craftsman.
Posted by Bob at 9:34 PM 4 comments:

We are on the road and heading home, having spent the last 11 days in the Colorado Rockies riding bicycles, enjoying the scenery and visiting with family and friends. Bicycle riding in the Rockies was everything I expected and more. Beautiful scenery… High mountain passes… Difficult climbs… Thrilling descents… and Thin air… 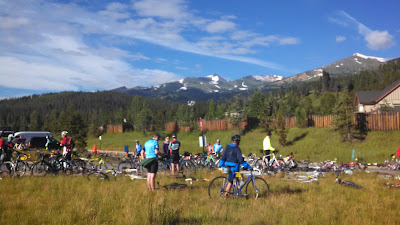 The thin air was perhaps the most taxing part of riding. Even after spending four days in the mountains to acclimate to the elevation, I found it difficult to breathe while riding. Things improved a bit over our stay, but getting enough air in my lungs was difficult throughout our stay.

Would I do it again? Yes, but maybe not for a year or two.

Now, half-way across Iowa on our way home, I am writing lists of boat work to do this weekend: Order more epoxy resin and hardener, work on getting the 'spare' bench-top planer operational, clean-up and set-up the small table saw, continue sand/prep the bottom for paint, paint the bottom… and more.

We are in Denver for a few days to acclimate to the elevation (5,000+ feet) before heading up to Copper Mountain on Monday to acclimate to that elevation (9,000+ feet) before next weekend's Courage Classic bicycle event based at Copper Mountain. This is one of those epic adventures shared by family and friends so as people trickle into town over the next few days we'll be catching up with everyone's news (and the chest-thumping about how hard we've all trained and the ground work for excuses for next weekend's performance.) It is all in good fun and, since it is not a race, we're all here to support each others' efforts.

So, there will be no actual work done on Gardens for a week and a half but I did bring a notebook to list the things I need to work on when I get home. That list seems to be growing daily.
Posted by Bob at 4:45 PM No comments:

Last Wednesday my Ryobi bench-top planer quit working. Seemed to be an electrical problem with the switch. I removed the switch (after unplugging the machine) to find three wires - one completely burned through, one scorched and the other seemingly okay. The socket for the completely burned wire was melted into a glob of burned plastic. Not a good thing in my mind. 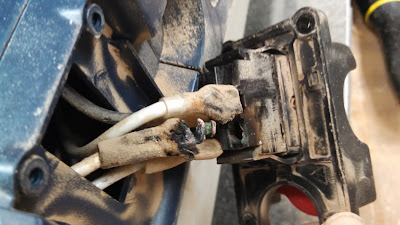 Since the switch was screwed to the body of the planer, I figured the switch could be replaced (with new wiring, of course). So, I went exploring on the internet…

If a replacement switch was ever available, it isn't now. According to a couple different on-line parts suppliers, the switch is integrated into the Motor/Switch Assembly, which can be had for a mere $287 plus shipping.

I'm now shopping for a new planer.
Posted by Bob at 9:43 PM No comments:

Earlier in life, I eschewed expensive power tools like the table saw, drill press, bandsaw, planer and jointer. Why did I downplay the utility of such tools? Mainly, I think, because I had no experience with them, I didn't have shop space and I couldn't afford them. That was then. This is now.

My shop is cozy (read that as "small") but I now have a table saw, bandsaw, drill press, planer and a mortising machine (which wasn't even on my radar when I was younger). There is also a radial arm saw in the back of the barn and a disassembled jointer in the basement (I have no idea how to get it up out of the basement and reassembled).

My Dad and I bought the radial arm saw (Craftsman 10") in the mid-70s. I brought it to the Farm from my brother's place last summer. My intention was to set it up in one of the long aisles of the barn to rip staves for birdsmouth spars (the shop is too small to rip anything over 9' in length and the table saw). 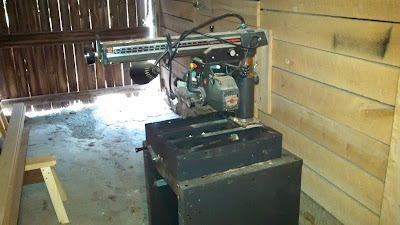 Well, if I can't use the table saw in the shop, I decided to use this smaller saw that has been stored in the barn. 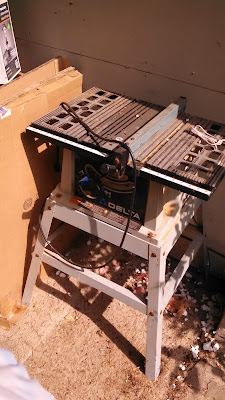 When the time comes (waiting for several schedules to match up), I'll set up the saw and in-feed and out-feed support in the garage (nice level floor with space out the door) and we'll (helpers and I) rip the CVG Doug Fir I have on hand for birdsmouth staves. We'll also bring the router table up to the garage to notch the staves. We'll begin with the mizzen mast. (An 8' practice spar went together without mishap a week ago.)

Lastly, my inexpensive ($150 on CraigsList) Ryobi benchtop planer has, apparently, given up the ghost. 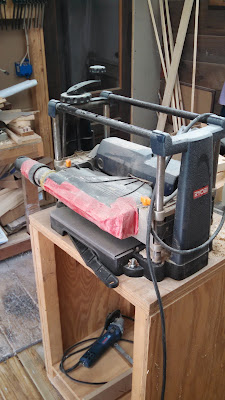 Up until yesterday it worked fine. Yesterday, the On/Off switch was finicky - had to be wiggled a bit to make contact - and then the motor would only run without a load. Running a board through, even without the blades in contact with the wood, caused the motor to quit running. One possibility is the vibration of the board being pulled through the planer is enough to cause the On/Off switch to fail (I am not an electrician and have never played one on TV - so I am just guessing). I'll ask one of my electrically inclined friends about it and try to find a replacement switch on line to possibly replace the existing switch. The other possibility is a new planer (a truly new model, not a used one).

The last four years have taught me the utility of large power tools and the value of buying the best new tool I can afford when I need a new tool.
Posted by Bob at 1:55 PM 4 comments: