A few days ago,I asked for - and received - suggestions about transporting (when towing the boat) spars.

Here is my roughed out solution for the main mast: 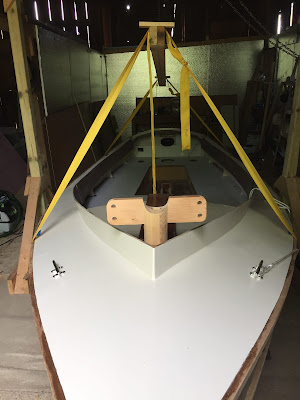 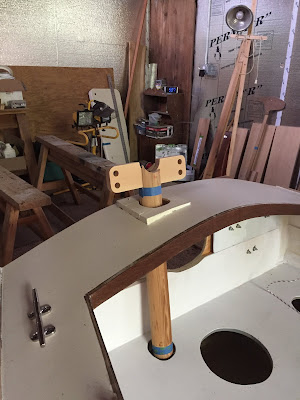 These will support the main. The mizzen mast and boom/sail/yard bundle will be stowed and secured in the boat.

Jan says the supports look like wind-up keys...
Posted by Bob at 9:11 AM 2 comments:

I was a bit nervous about putting Gardens back on her trailer yesterday. Several recent threads (including one of my own) about trailer set up had me a bit anxious. Things went better than expected, which doesn't happen all that much, and Gardens rested easy on her trailer late yesterday afternoon. 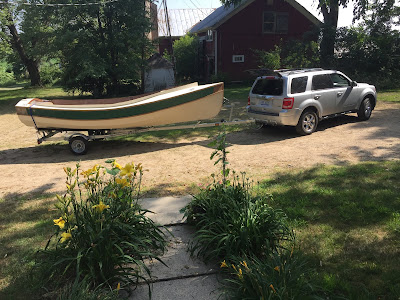 Around 5:30, I got the idea to take a short (really) drive just to see how things would go down the road. I mentioned this to Jan, who suggested I wait for the afternoon rush hour of folks heading home from work. Seemed like a good plan so, after those three vehicles (two pick-ups and an SUV) went by the house, I pulled out of the drive, went two miles down to a church parking lot, turned around and came home. Four miles isn't much but I felt much better for having made that little trek.

One minor incident happened when I put the rig back in the barn - I bumped into one of my sawhorses (which was really well out of the way) and broke the lens out of the driver's side light on the trailer (no sawhorses were damaged). After getting the boat & trailer in the barn, I was too tired to change out the light. I figured I could take a few minutes in the morning to take care of that. Right, a "few" was more like 90 minutes but I got it done.

Today was Gardens' test-launch. I needed to find out if the centerboard pin leaked at all - because that, to me, is the most likely candidate for a leak - and I've been nervous about it.

Jan went for sandwiches, drinks and other goodies for a post-launch picnic and I headed to Wabasis Lake (a bit west of Greenville, MI) with Gardens in tow. A very pleasant 16-mile drive to the lake was uneventful.

Not too busy at the ramp, which is a nice five-lanes with docks and lots of room in front of the ramp facility. Friends met us there to help and my sister and brother-in-law arrived to witness the event, too. 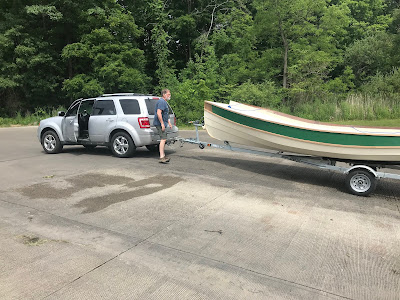 Finally put Gardens in the water without incident and, she FLOATS!! 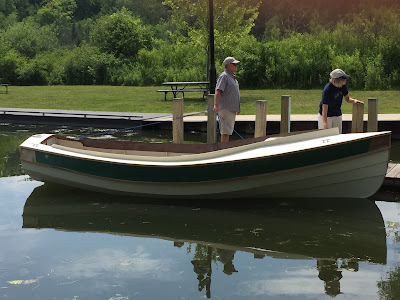 No leaks of any kind anywhere. I really can't describe what a relief that was and is! Also very nice to hear a number of compliments from other boaters. After pulling Gardens' out of the lake, the six of us had a very nice picnic lunch which included a celebratory toast to Gardens.

No masts, sails, rigging or other gear today as the mission was to check for leaks. That, and I am still sorting out how to carry the masts and sails. However, I am glad we were not planning to sail today as the centerboard would not lower all the way and that would not have been good out on the lake. Our diagnosis is that the top foreward corner of the centerboard is not clearing the front on the case. We'll check again before pulling the board and reshaping that corner, but we believe that is the issue. And, no, I did not test fit the centerboard in the case early on in the build (like before installing the CB case in the boat).

As far as I'm concerned, today's out-of-barn experience was a huge success! When I got home, I took numerous photos to serve as reminders of what needs to be done (plenty!) to finish Gardens. The next time out will be the official launch and first sail!
Posted by Bob at 7:05 PM 2 comments:

Saturday's Show & Tell for some friends and family was fun on several levels: sharing Gardens in her nearly completed stage and sorting out what rigging needs to be tweaked.

Recent work done: deck cleats installed, spar leathers installed, masts stepped, main sail raised, outhaul installed, motor mount installed, rudder head and tiller in place, and most of the rigging for the main sorted out. I got to show and tell and answer questions several times as family and friends came and went at different times throughout the day - and that was okay. 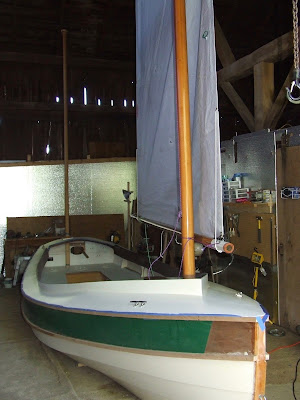 The downhaul is not yet installed, the halyard set-up needs some tweaking, and the mainsheet hardware needs to be installed. The centerboard case cap needs to be finished and installed, too. 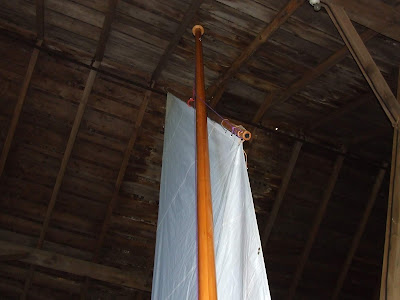 Being able to set sail inside the barn is a plus on hot summer days. 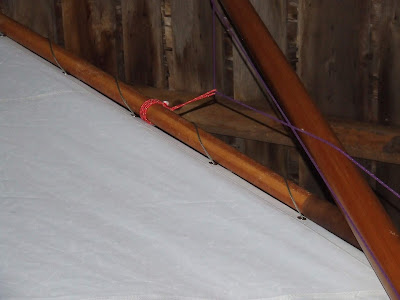 The halyard attachment point need adjusting. It needs to be a smaller loop and moved foreward on the yard. 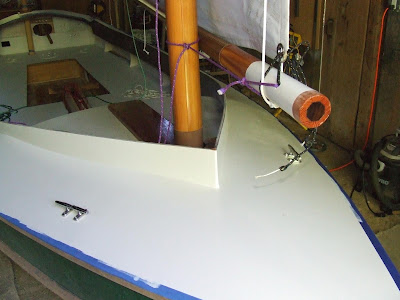 Since I was test fitting the sail to the spars, I used an odd assortment of rope to rig the sail. I'll keep some of what I used and replace some of the bits and pieces with new and proper line. The rag-tag ends of lashings will be shortened and cleaned up.

The mizzen sail needs grommets installed - and I need a tutorial on rigging (and sailing) the mizzen.

The top decks are painted but the interior needs color coating. Gun'ls and rub-rails need varnishing and there's a bit of cleanup at the bow to be done.