Building birdsmouth spars using the modified birdsmouth technique (asymmetric V-notch) requires paying closer attention to details than I did this past week.

The scarf cuts in the milled-to-size and notched pieces didn't match up properly due to the asymmetric features of the notch (and my inattention to that detail when making the scarf cuts.) Fortunately, the pieces are long enough to let me recut them. (And if you have the luxury of having full length lumber available, good for you!)

Using less than perfect "Select" grade lumber meant dealing with a few knots in the staves - and I figured I could just flip/flop staves end-for-end to stagger and/or separate the knots. But, wait… because that notch is asymmetric, it isn't possible to flip/flop the staves end-for-end as doing so changes the orientation of the notch. I'll insert a plug to reinforce the area with the knots. (If I'm not happy with this yard when it is completed, I'll build a new one.)

Cutting plugs for the spars on the table saw is easier than I expected it to be (remember, I have been using a table saw for less than a year and I am still learning.)

Assembling the staves for a dry fit is tricky and frustrating. That (trickiness and frustration) can be minimized by using stands/supports to hold four or five staves together while adding the last three or four staves. I can only imagine how much fun assembling will be with everything lathered up with epoxy...

CVG DF is much nicer lumber for building spars than "select" grade lumber from a big-box store. Two years ago I purchased two 20' pieces of CVG DF, intending to use them for the main mast. However, moving those 20' pieces from where I was to where I am meant having to cut them to a more manageable size. So, those two pieces are being used to build the main boom and mizzen mast. I'll order new material for the main mast. (I bought the select grade lumber to experiment building birdsmouth spars, figuring if it didn't work, I didn't "waste" the DF on the experiment.)

Sure, everything is a work in progress these days, but here are a few of the specific items underway in the shop: I am hopeful that I'm climbing the steep part of the birdsmouth spar learning curve with the yard, and that the boom, mizzen mast and main mast will be quicker and easier to fabricate. I am also hopeful that work on Gardens speeds up (without creating problems) as I get back into gear with my boat building.
Posted by Bob at 6:56 PM No comments:

The Clock is Running

So far, with Gardens, my "deadline" has been, "When I get her done." Well, that is not specific enough. But as of today, I have a specific goal/deadline/target for finishing Gardens.

August. We plan to take Gardens to Cedar Beach in Cedarville on Michigan's Upper Peninsula to share some sailing time with family and friends. 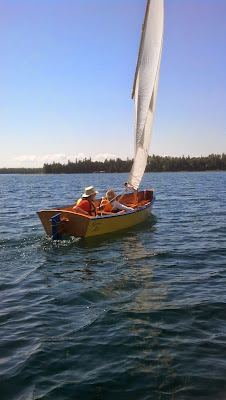 Plans, lists and scheduling on tap for the next day or so and then the real work begins…

The clock is running.

Yesterday the sun was shining and the sky was blue. The temperatures reached the mid-30s (F), which made yesterday the warmest day we've had in several weeks. While out on the front porch, sheltered from what little wind there was, I could hear the snow melting! This morning there is a subtle, but noticeable, "slumping" of the snow in the yard. All of these bits and pieces are pointing to a definite change in the weather! Finally.

To top off yesterday's natural beauty, the rising moon cast a pleasant glow on the snow in the front yard.

The shop got a good airing out and cleaning today!

The weather is changing!
Posted by Bob at 6:20 PM 2 comments:

Reading other blogs is entertaining, informative, inspirational and a great way to while away some time.

Other blogs are great sources for shop tips, methods, and solutions/answers to problems/questions that come up from time to time. No need to invent the wheel after it has already been done - and I am coming to the conclusion that every single task/process/build technique I encounter has already been figured out by someone else.

As I plot & plan the building of Gardens' birdsmouth spars, I've drawn recent inspiration and a few shop tips from these blogs (and this is by no means an exhaustive list): And, as is readily apparent, some of these tips overlap or are variations of the same idea (tool to spread epoxy). But these are all useful ideas and tips. I will continue to read others' blogs and learn what I can along the way.
Posted by Bob at 7:58 PM 2 comments:

Waiting for the Sun...

Okay, so, officially, we have three more weeks of winter but today is warmer than is has been in a few weeks. Can we pretend winter is nearly over and that spring is nearly here?

Maybe… but I still can't open the main door to the boat bay. Too much snow and ice. And I still can't get my shop warmed up to much more than 40° F. Same with the "sail loft" - studio space above the shop. All of which means I really can't get much boat work or woodworking done any time soon.

I'll have to be content with making lists of projects to be done once I can get to the boat, the shop and the "sail loft."

Today's List of Future Tasks & Projects
…and so much more.

Of course, each item listed above is a header for its own list… and so on... and so on...