The stem - or, more succinctly, the outer stem - came together rather suddenly yesterday. I spent a couple of hours over last week re-sawing and planing four 1x4s into nine useable 3.5mm thick pieces for the lamination.

And, I watched this series of videos on Laminating the Stem several times. The video answered a basic question I had: How do you glue up so many pieces with all those clamps in the way? (Somewhere I got the notion that the individual pieces were added to the form one at a time…)

So, after applying a finish to a couple of picture frames and a bit of work on the chine, I found myself with time, the stem pieces and no excuses... I decided there's no time like the here and now to glue up the stem.

Following the general guidelines (but not all of the specifics - ( I used waxed paper rather than plastic under the glue-up), the gluing, assembly and clamping went remarkably well. The only real "mix-up" (literally) came when I tried to mix a batch of epoxy that exceeded my scale's capacity and I lost track of the mix. I set that aside and continued on. Later in the day that unused batch had set up nicely - I could have used it but there was no way to know that at the time.

The stem is all clamped up, the epoxy is doing its thing and I plan to leave it in the form for a few days. 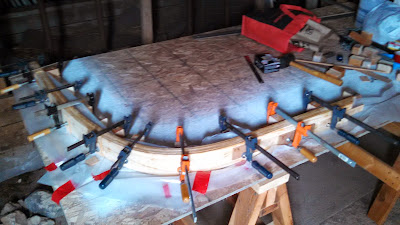 In the meantime, work continues on the bottom, planks, spars (and other woodworking projects).
Posted by Bob at 10:04 AM