I was finally able to get to the shop to test the birdsmouth technique for building spars. Actually, it wasn't a test of the method so much as a test of my abilities. My first reaction to a new-to-me tool or technique is usually, "Oh, man, there is no way I could do that…" and I dismiss the new-to-me tool/technique without ever trying it as beyond my abilities. Then, with the passage of time (sometimes weeks, sometimes months or, in this case, years), I eventually try the tool/technique to discover that I can, in fact, use it! Such is the case with the birdsmouth technique.

I am happy to say the milling of the staves went without difficulty using a drum sander (to thickness the stock), table saw (to rip the staves to the proper width) and router table (to mill the birdsmouth V-notch). 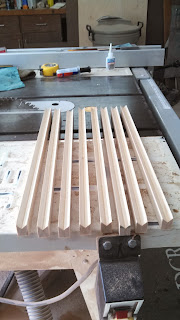 Gluing the test sample also went without a hitch. The test 'spars' are the same diameter of the mizzen mast and I found the staves to be easy to run on the router table - one of my earlier concerns. Hose clamps worked well for these short sections and, I am sure, would work on the masts - assuming I have enough on hand. 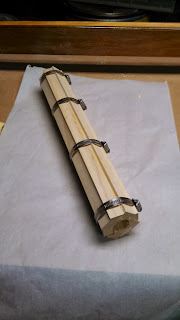 Gluing up two 18" test samples with TiteBond II is probably not an adequate dress rehearsal for gluing up two masts (14' mizzen and 20' main) with epoxy. I think more helpers and a warmer day will make gluing up the masts a relatively painless experience. A gluing party may be in order this spring. Beer may be offered as an enticement…

Two lessons learned in this experiment: One, the birdsmouth technique is not beyond my abilities. And, more importantly, Two, most boatbuilding techniques involve a series of simple steps, which means I can learn most -if not all- of them. I just have to remember that second lesson.
Posted by Bob at 4:11 PM