Yesterday I glued up two short spar blanks using epoxy. Here's one of them. 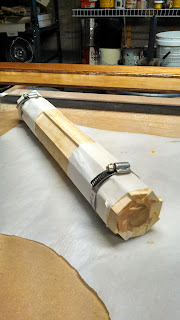 Today I cut the ends of one blank flush and trimmed the corners to get a nice octagonal shape. I used a drum sander to trim the corners - not the quickest way to do it but with my planes in the other shop and cabin fever setting in, I used what I had available. I'll take the second blank to my brother-in-law's shop for turning on a lathe. 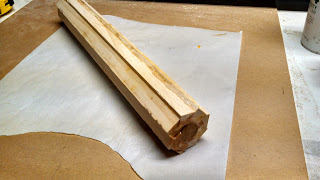 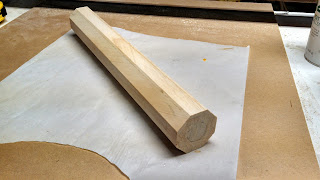 I used pieces of a round dowel for plugs, which worked for this experiment but I think I'd want to cut octagonal plugs for the real spars. 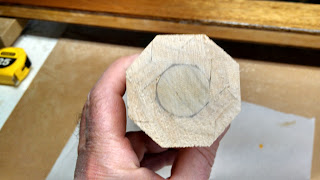 Some thoughts and observations from this experiment: Using the Birdsmouth Calculators it occurred to me that by tapering the staves as shown in the illustration, the inside of the spar is tapered as well as the the outside. This creates - in my mind - an obstacle: how does one accurately cut tapered octagonal plugs? Or is this not really an obstacle/issue?

One other factor to take into account is John Welsford's note on the sail-plan drawing: "taper outside not the inside space." I am not visualizing a straight-forward way to taper and notch the staves prior to assembly. Any suggestions on how to do this?
Posted by Bob at 3:40 PM