When I lofted F-2, I misread a dimension on the drawing resulting in the notch for the top stringer being 40mm too high. I found that error when I was fitting the stringers last summer. My solution - once I found my mistake - was to cut the notch 40mm deeper to fit the stringer without cracking it. I planned to reshape the top of F-2 later. 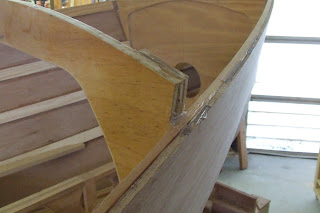 "Later" came the other day. After checking the dimensions several times, I drew a fair curve from the top of F-2 at the cutout for the king plank to the sheer line where F-2 meets the sheer. Using a grinder, I carefully removed material until I had a shape I liked without going below the arc drawn on the port side of the frame. 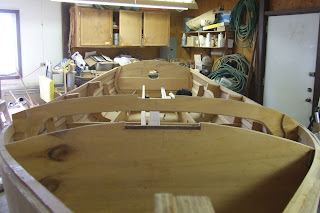 A straight edge clamped to the frame was used to measure and mark points on the starboard side to match the curve cut in the port side. 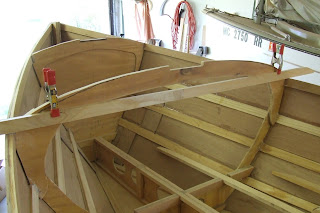 I marked the curve and continued with the grinder until I was close to matching shapes. Then it was a matter of measuring, grinding and patience to get the starboard side to match the port side. 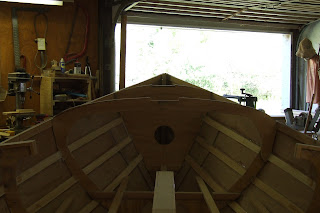 Last week I put a 19mm thick board across F-1 and F-2 and up to the stem to simulate the king plank. Where that board met the stem seemed to be too low on the stem. 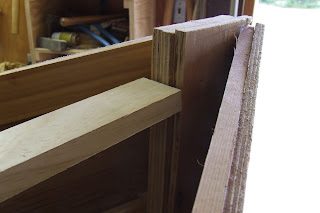 I thought the fix would be to cut a deeper notch in F-2 so the king plank would pivot on F-1 and meet the stem where it is supposed to meet it. I thought cutting that notch would just be part of remediating F-2. That wasn't the case as the recut notch in F-2 would be too deep.

That left modifying F-1 so the king plank would meet the stem properly. About the only modification available was to make the notch in F-1 shallower (pushing the king plank higher). Several thicknesses of plywood were tried but the best fit was 9mm plywood cut to fit the notch. That piece was epoxy coated; then epoxied and screwed into place.

The king plank now meets the stem where it should. 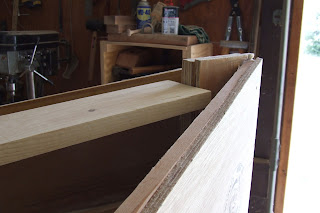