Isn't that the Truth?!

The planking is done. The last two pieces of planking were glued in place early this afternoon.

The last bit of planking installed on a hull is sometimes called the "shutter plank" (as in "Shutting or closing the hull") but more often it is referred to as the "whiskey plank." Tradition has it that completing the planking is a milestone deserving a celebration - a shot of whiskey being the traditional form of celebration. (Makes you wonder which came first: the celebration or the name.)

From wisegeek.com:
A whiskey plank is the last plank which needs to be put in place to finish a ship's hull. Although a ship is far from finished once the whiskey plank has been installed, mounting the whiskey plank marks a major milestone in the construction of a ship, and many shipbuilders treat it as a cause for celebration. 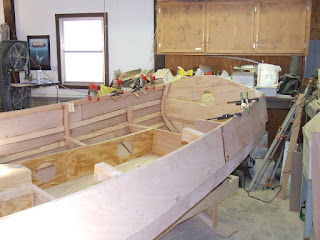 At any rate, yesterday I thought it a bit presumptuous to consider Gardens' last bit of planking as a "whiskey plank" worthy of celebration. Not so today. When that last piece was glued in place (for the record, it was the aft section of the starboard sheer strake), I felt a great sense of accomplishment and relief. We celebrated the milestone with a toast of Jack Daniels.

"...a ship is far from finished once the whiskey plank has been installed..." 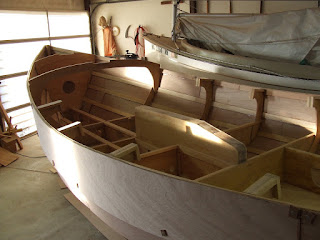 Isn't that the truth?! Sealing, fairing and sanding the hull; fitting out the interior and outfitting - quite a lot left to do. But for tonight I will enjoy the moment.
Posted by Bob at 9:55 PM