I like the idea of soft shackles. They can replace hardware, they are (I heard) easy to make, and represent another skill that is useful on a small boat. There is a lot of information available about soft shackles on the internet (and my book shelf) but most of it seemed mysterious, particularly about the knots (diamond or button) used on soft shackles.

An inquiry to the John Welsford Small Craft FB page resulted in several good suggestions. Animated Knots, Allen Edwards, and a book, Splicing Modern Ropes were good starting points (better directed than my own research had been). I ordered the book and watched the videos multiple times. I had, I was sure, about 50' of 1/4" Dyneema line that I bought but didn't use and a fid. However, somehow those items disappeared into the depths of the barn and I resorted to ordering new line and fids. I fully expected to find the lost items as soon as I hit "Send" on my orders - but no such luck. I have supplies of other small line, so I decided to practice the diamond knot. That was frustrating. I couldn't get it right no matter how I tried. Waiting for the new supplies seemed like a good idea - at least then I could figure out the first half of making the shackles.

The new line and fids arrived today and I began experimenting. My first efforts were disappointing. But with a little time and practice I was able to complete my first 3" diameter soft shackle using 5/32" Dyneema and a home-made pull tool! The knot IS a diamond knot - but I clearly need more practice! The tails have not been trimmed as I may undo the knot and try again. 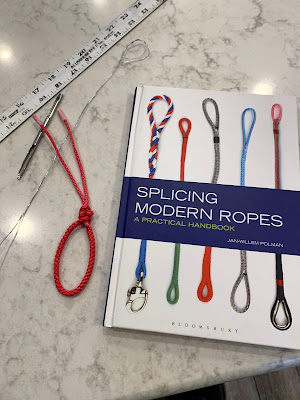 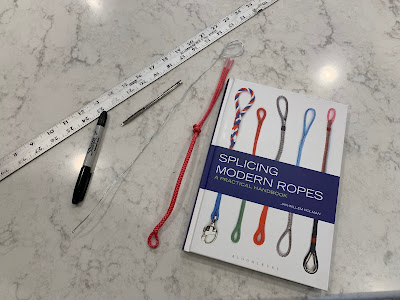