I may be a slow study…

Eyeballing the planks to get them symmetric from side to side wasn't working too well for me. I can step back from one side to get a decent look but the other side is close in to a wall, limiting the visual perspective. And, even though I did some trimming and sanding, I wasn't very happy with the 'other' side. And, even I could see the planks were not symmetric (never mind that I could have cut the planks in pairs… ).

A friend of mine is fond of saying, "If you can't put a number to it, it's just voodoo." And that's what I felt I was doing - somehow, the planks would magically match up. So, how to put a number on them?

This is where I may be slower than some… It took me a while to figure out I could measure points on the planks on one side of the boat and transfer those points (measurements) to the other side, connect the dots and cut to that line.

So, a nice long straight edge, a carpenter's square and a ruler resulted in an impromptu plank gauge. 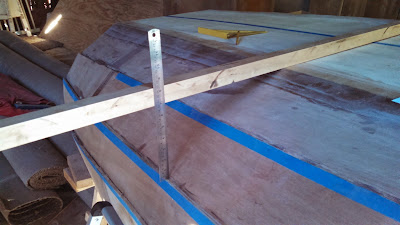 I marked off 12 stations along the centerline of the boat, drew perpendicular lines to the chines, placed the straight edge across at each station and measured to the 'top' of the plank, recorded the measurements and transferred to the other side. Masking tape 'connected the dots' and the multi-tool trimmed away the excess material. An assortment of sanders and rasps faired and smoothed the edges of the planks. Gardens is looking much better to me than she did earlier in the week.
Posted by Bob at 7:36 PM