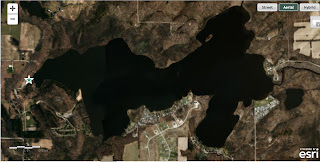 Located southeast of Greenville, MI, and about 20 minutes from the house, Wabasis Lake has become my "First Launch of the Season" site. It is near by, has a great four-lane boat ramp (at west end of lake, marked with a star in the image, and is pretty quiet on weekdays. The lake, at 418 acres, is not large, nor is it as 'glamorous' as McKay Bay, but it is convenient for early season shake-down sails and just getting out on the water.
February 18, 2020
McKay Bay is located in Michigan's Les Cheaneaux Islands at the north end of Lake Huron. McKay Bay is about three miles (by road) east of Centerville, MI and about five miles east of Hessel, MI. Both of those towns have grocery stores, marinas, casual dining and pretty much any service a boater could want or need.
McKay Bay runs NW to SE. The Bay is approximately 1.3 miles long; .25 miles wide near the NE end and gradually widens to .5 mild across at its SE end. The water depths last summer were approximately four feet (4') higher than depths shown on the chart. There is a public boat ramp on the west side of the Bay near the NE end. 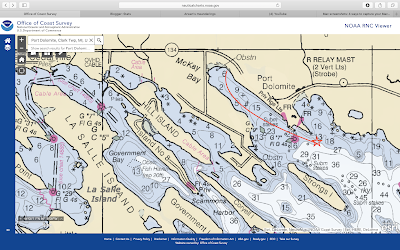 I apologize for the marked up screen shot (from Office of Coast Survey ) - I'm learning how to grab screen shots and mark them up. I'm also still learning the ins-and-outs of my GPS so the red line does not represent a sailing track. 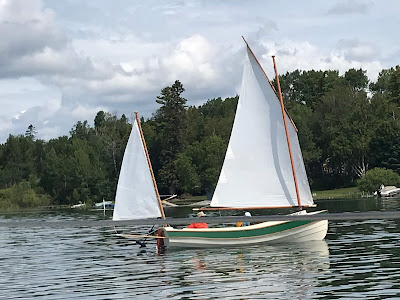 The shoreline is typical Michigan: low hills with evergreen trees rising away from the water. There are numerous cottages along the Bay, particularly on the west side. Port Dolomite is on the east side of the SE end of the Bay. While Lake freighters frequent the Port Dolomite dock, they rather add to the character of the Bay rather than detract from it. Port Dolomite is off Gardens' starboard bow in the following video. 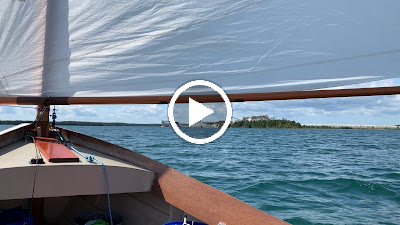 This video is raw... taken with an iPhone and without editing whatsoever. The star on the above screen shot of the chart is approximately where the video was taken.I am exploring expanding my video skills so future write-ups may include more video. We'll see.

Text above this line is new content from February 2020 forward:

In an earlier post I listed a number of sailing venues I want to explore with Gardens of Fenwick. These included Les Cheaneaux Islands (Lake Huron), the North Channel (Lake Huron, Canada), the Maine Island Trail, the Apostle Islands (Lake Superior) and the San Juan Islands (Salish Sea - sometimes referred to as Puget Sound).

Well, it is February, I'm making progress with the build and, sometimes, when waiting for epoxy to cure, I dream of that first 'adventure sail' with Gardens of Fenwick. Oh, I know, that first adventure won't be terribly exotic or, weather permitting, extreme but it will be the first - the beginning of what I hope will be many adventures. So, what'll it be?

In July we are going to Cedarville in Les Cheneaux Islands on Michigan's Upper Peninsula. Certainly, there will be day-sails - perhaps an expedition to Government Island - to shake down GF and give me a chance to sort out rigging and what-not. But I am hopeful for decent enough weather - and confidence in myself - to undertake my first adventure sail. Google Earth is an excellent tool for armchair exploration and I have done just that. I see two possibilities for my first adventure.

The first possibility: 18 miles (give or take) from McKay Bay, just east of Cedarville, to Search Bay, just west of Hessel. 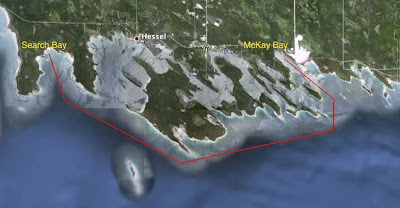 The second possibility would be a 17-mile (give or take) voyage from McKay Bay to DeTour State Park, between Cedarville and DeTour Village.

Either of these possibilities would be a 2-day trip. A day there, overnight (either on the hook or tent camping on shore), and a day back. Both offer open water sailing on Lake Huron, although Search Bay can be reached by threading through the islands.

Of course, a third possibility exists. A three-day journey from McKay Bay to Search Bay to DeTour State Park and return to McKay Bay. All conditions - outfitting, rigging, weather, confidence, etc. - would have to be perfect for this to take place but... it could happen...

This is the stuff of February dreams...