May 29, 2014
Many changes to the Shop since January 2012... Not the least of which is a completely new location! Last fall I moved about 20 miles from the cozy environs of Little House (located in Fenwick, MI) to the Farm (in Gowen, MI) as a direct and happy result of getting married!

As noted elsewhere, this past winter was particularly bad: Lots of snow, wind and COLD temperatures. Not much going on in the new Shop which really isn't a proper Shop yet. Now, with improving weather and a brief respite from an extensive travel schedule, I have been working on getting the Shop in shape.

The new Shop is taking shape in a space measuring 14' x 18' in a barn that was built in the 1870s. The dirt floor in that space was very uneven - lots of low spots and not level at all. There were two "levels" - one with the dirt floor and a platform about 4' wide and 10" higher along one wall. That "platform" was partially covered with old 2x12 planks and partially covered with a sheet of plywood. Those planks are not coming out any time soon so I am working around them.

My 'solution' is to build a deck floor to match the height of the higher platform. The deck rests on a grid of 2x4s on 16" centers over 4x4s on 36' centers. The grid rests on a bed of sand. The 5 yards of sand arrived Tuesday: 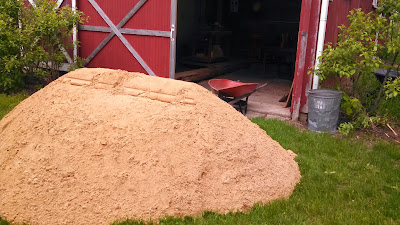 Wheelbarrows, buckets and shovels moved about a third of it to level the floor. The 4x4s were positioned and leveled; 2x4s were toe-nailed into place; and more sand filled in the grid. 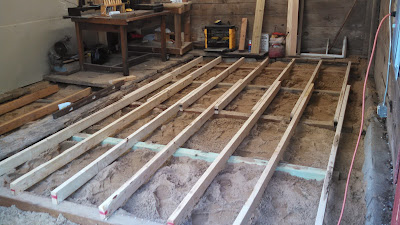 January 10, 2012
Storage for small but cluttering items was added to the shop today. Small stuff includes fasteners (screws, bolts, nuts, washers, nails), driver bits and who knows what other bits, parts and pieces that were cluttering the work bench. Drawers and labels - yep, that's what I needed - along with the resolve to actually put things in a drawer AND label it!

A rather crude 3-shelf plywood storage unit was also added to the end of the work bench to hold a mix of larger miscellaneous tools and supplies - again freeing up bench-top space.

I really need to figure out a wood-scrap system. What is to small to keep, what is too big to throw away and where do I keep what I want to save?

A late Christmas? Maybe. At any rate UPS delivered a package from San Rafael, CA today - a drill press! This will be perfect for drilling the pivot holes for the centerboard and rudder - and any number of other applications calling for perfectly vertical holes! I suspect I'll build a dedicated stand for my new (to me) drill press. It does a remarkable job sanding edges of plywood parts (frames) and is especially nice for finishing the ventilation cut-outs in the frames. Way back in September, at the Timothy Lake messabout, Dennis Macumber described the router table he built so he could cut the pieces for his birdsmouth mast. He mailed the plans and instructions for the table to me and they were waiting for me upon my return from my Epic West Coast Road Trip.

I began assembling the router table right away but it wasn't until today that I got it all put together and working. The table is portable and clamps to the end of my work table/bench: While it will be next spring before I get to the the birdsmouth mast and spars projects, I couldn't help but try a few cuts this afternoon. The table works very well although I will need to figure out a dust collection attachment to save on clean-up!

This was a very worthwhile project - and very easy to build. Thank you, Dennis.

The building space is a 24'x24' metal-sided pole building with a cement floor. The shop has electric power and lights. The shop is not heated.

November 6, 2011
Here's a nice little fix for a minor problem I've experienced: How to store my clamps. The bar clamps used to reside in a bucket on the floor but frequently, more often than not, cluttered bench-tops and were in constant motion (having to be moved to make room for something else). The spring clamps were either clamped to the edge of the work table (which wasn't always a good place) or kept the bar clamps company on the work bench.

I'll probably have to create more storage as the project continues and I acquire more clamps. One can never have too many clamps...

I have been cutting and milling lumber into pieces for the two chine logs and ten stringers. Since I'm not able to conveniently purchase 20' lengths of lumber, I have to scarph (two pieces of wood cut at matching angles and glued together) two 10'sections together to get the lengths I need.

There are a number of ways to make the scarph cuts: on a table saw with a jig; with a router using a jig; with a hand saw; with a jack plane and with a power sander. I don't have a table saw. I haven't had much success using hand saws or power sanders on this type of cut. I have used a router and a jig with success but when I moved the jig was left behind. I have had good success making scarph cuts with a jack plane - but there are 12 joins to be made, which means a total of 24 cuts. That is a lot of planing!

I decided to make a new jig for my new router. I have a laminate trimmer I used for the few scarph cuts on the Goat Island Skiff but I bought a new router (I plan to use it to build birdsmouth spars). Here is the new router and jig:

The router is secured to the sled and the sled is moved up, down and across the rails. The piece being cut is clamped in the jig and as the sled moves down the rails the router cuts the wood at the proper angle (the slope of the rails).

As winter approaches, temperatures in the barn hover in the mid-40s. This is too cold to work effectively with epoxy (or other adhesives). In order to complete parts and components for the project, I needed a way to create a warmer environment for epoxy to cure.

The obvious course of action would be to heat the barn. While I am looking into several options to do that, I needed a more immediate solution. Several friends of mine have created heating booths with rudimentary wood frames, plastic sheeting and powered with a light bulb. The idea is to create a small space which can be easily heated around the work item to facilitate the curing epoxy, paint or varnish. I decided to build a relatively small box using scraps of plywood I had on hand and a work-light.

The box is purpose-built for the scarph joints necessary to make the long stringer pieces out of available lengths of lumber.

Here is a series of photos showing the warming box: The channel is lined with wax paper to prevent gluing the stringer to the channel. Pieces clamped into the channel. Since the glued up stringers are 21' long, the ends are supported to prevent them from drooping and stressing the joint. Top and ends of the box in place. Work-light held in place with the two strips of wood. Other configurations of the warming box concept when larger (too large to fit the current box) components (frames, etc) are glued.